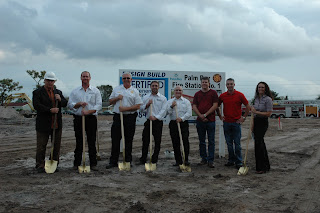 PALM BAY, Florida –Residents in Northeast Palm Bay will soon have a new fire station that promises to  improve the efficiency of emergency response in the area.  Mayor John Mazziotti, members of council, the city manager, and other dignitaries joined the fire chief in a ceremonial ground breaking today.
It  marks the start of construction for the new Fire Station 1 which will move from Palm Bay Road to Market Circle NE at Port Malabar Boulevard.  The station is being designed and constructed by Certified General Contractors at a cost of $1.9 million.  It is funded through 2007 bond designated for capital improvements.  The new station replaces the old Station 1 which was built more than 50 years ago and was not designed to support the staff and equipment to meet today’s demands.  “This move is long overdue,” said Chief Stables.  “This new station in this new location will improve our efficiency allowing us to deliver better service to our citizens.”
In 2011, Station 1 personnel responded to 4,102 calls for service which represents approximately 35% of the total calls for fire-rescue service citywide.  The station and its personnel is one of 5 serving the more than 107,000 residents of the city.  It’s daily staffing includes 14 personnel comprised of a district chief, 1 captain, 2 lieutenants, 2 driver-engineers, 6 firefighters, 1 floating lieutenant and 1 floating driver-engineer.  The station is equipped with 1 engine, 1 ladder truck, 1 brush truck, 1 safety vehicle, 1 district chief vehicle and one “backup” engine when operational.
Station 1 is scheduled to be completed in September of this year.